Staff from Department of Agriculture, Cavan were Carol Singing on the square in Cavan Town on Thursday 12th December from 1pm-2pm and raised €1,060 for C.A.P.S. Our sincere thanks to all of the staff who took part in this event from all at C.A.P.S.

C.A.P.S. won the Lidl Carol Singing competition and were Carol Singing/bucket shaking on Saturday 14th December from 12pm-2pm at Lidl in Cavan. Parents, carers and members joined us singing and playing instruments and we raised €286.74 on the day!!

Stradone Annual Tractor Run Presentation to C.A.P.S. took place on Saturday 14th December at 9:15pm in The Cross Pub, Stradone. Thank you to Rosemary, Alan & Hugh Clarke for organising and hosting this event which raised €1,651.30 for C.A.P.S.

The C.A.P.S. Annual Christmas Party was held on Sunday 15th December 2019 from 12pm-2pm. There was music, food, fun and lots of laughter with Santa and his helpers.
Thank you to Darren Curran our DJ, Colin Walker our face painter and balloon maker and everyone who helped out and attend on the day. You all helped make this another lovely memorable event.

Every year since 2011 students of St Patrick’s College, Cavan have written an original song and the entire music department of the choir, traditional Irish Group and Jazz Band have taken part in the recordings of the CD. 2019 marks the 9th anniversary of this tradition begun by Josh Mc Clorey & Liam van der Spek. This year’s song was written by CJ Burns, Conor Gannon, Conor Jordan & Dylan Brady. From 2011 – 2018 proceeds from the CD sales have been donated to TY activities but in 2019 it was decided to donate to a worthy local charity. Cavan Autism Parents Support CLG are the beneficiaries of 2019.

Thank you so much to everyone who was involved in the production/sales of this CD and for choosing to donate the proceeds to CAPS!! 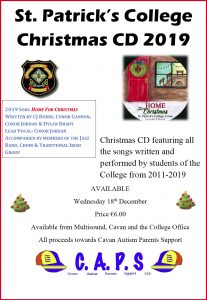 The Dealz Bucket Shake took place on Thursday 19th, Friday 20th and Saturday 21st December from 10am – 6pm daily. Thank you so much to all of you who got in the Christmas spirit and helped us out with this event. We raised a total of €1,475.30!!

Crosserlough GFC once again be hosted the St. Stephen’s Day walk in aid of C.A.P.S. at 12:30pm. It was a great way to walk off all those Christmas day calories and a bit of fun for all the kid’s also. Thanks again to Crosserlough GFC for hosting this event which raised €660 for C.A.P.S.

Find out lots more information on our list of upcoming camps for CAPS members.

Find out lots more information on our list of upcoming events for CAPS members.

Find out lots more information on our Saturday Club for CAPS members.

It happens almost every Friday at 7 pm. Find out more on what we do at the Club